One of the most interesting commodities, the Oil, is at a crucial spot for the longer scale. Let's examine it from the price action point of view by analyzing the continual Crude Light Futures Quarterly and Monthly charts. 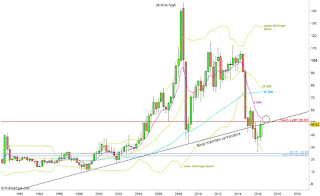 From price action point of view, the chances in succeeding with this current recovery (the first attempt of a recovery), after a such clear break down of a very important trendline - are slim!

There is even more to it. The most important last Low before the all time high, the Yearly LLBH (Last Low Before High) – the red line at 50.55, taken out by the collapse of 2008 is a major resistance in this area, and you can watch the previous Quarterly bar puncturing it, closing slightly below the uptrend line, but not weak enough for the current Quarter to drop sharply down.

Those two important indications – the up trendline and broken, and the Yearly LLBH taken out, having a follow thru down lately –both being retested for the first time from below – are reasons to be bearish on Oil for next few Quarters, by most chances.

Pay attention also to the 20 and 50 SMAs. The 20 SMA is about to cross the 50 SMA downward, a clear bearish sentiment.

The current quarter is the key for the timing of this expected wave down.

The most bearish scenario is that the price won't be able to take out the last important Monthly swing High, at 51.67 recorded last June. Instead we should see it reverses down, closing August very weak, probably taking out the August Low at 39.19 not earlier than by September.

The other scenario, that I currently would give more chances to, is eventually closing August rather strong, showing a sign of strength for another bullish attempt. September might start with breaking up the Monthly swing high (51.67) attracting many bulls for a perfect inverted Head&Shoulder formation on the Monthly chart. But, as it is most of the times when the perfect signal is against the trend, taking into consideration also the two important indications described above - it is wiser to wait for a clear sign of weakness and a clear reversal down that should lead September to close weak eventually, probably below the up trendline (and the Yearly LLBH line at 50.55), signaling that the next bearish wave might take place on the next Quarter (October-December). 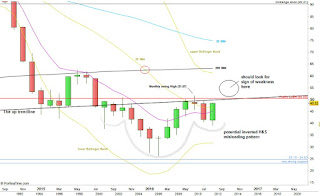 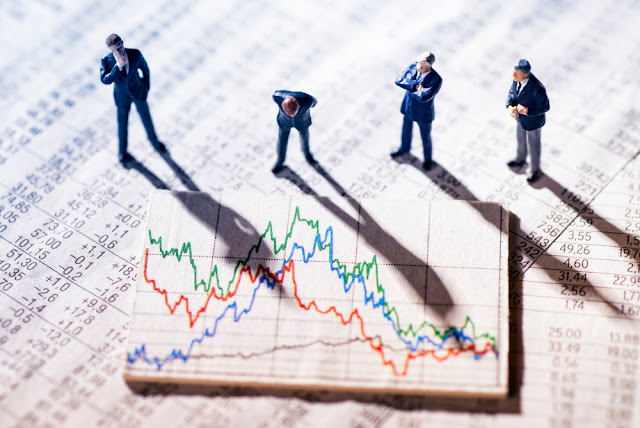